skip to main | skip to sidebar

So after taking the literature course this year (and enjoying it - almost surprisingly). I'm thinking of taking another lit. course next year. It's looking like a choice between the 19th Century novel and 20th Century lit. I'm kind of pulled towards the 19th century for a couple of reasons. 1) It's before the 20th (lol) so there may be some kind of progression reason for doing 20th century lit. second. 2) If I don't do it first I may decide to skip it and just do Shakespeare.

So in the spirit of getting ahead and knowing what doorsteps some of the 19th Century novels are, I'm trying to decide which texts to read first.

So if anyone has any opinions on the following novels - which to read first, which to get out of the way, which to put off as long as possible, let me know in the comments.

I recorded The Nines last week and finally got round to watching it Sunday night. This is where I admit that I did chop off the first ten minutes so I hope there wasn't anything crucial mentioned there. Hopefully some of that time was the ad break.

Anyway, it was just one line (in the whole film) that really caught my interest, in a conversation between Margaret and Gary:-

Margaret: If God is a ten, a theoretical ultimate, that-which-no-greater-can-be-imagined, you're more of a nine.
Gary: So what are you?
Margaret: Humans are sevens. Monkeys are sixes.
Gary: What are the eights?
Margaret: Koalas. They're telepathic. Plus, they control the weather.

I just LOVE that. lol

From now on, everytime I see a koala on the tv, I just know that that line is going to pop into my head. (Plus you have to admit they look like they could be telepathic) :) 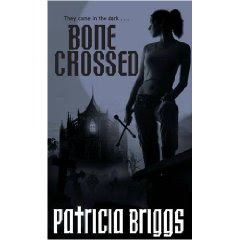 Whilst I would really like to start this review by once again stating how much I hate the UK cover, I'll try and restrain myself...whoops.

I found this one slightly worrying whilst I was reading it. Mainly because it seemed to be going off in two different directions at once. Worrying is not exactly the right word but I wasn't sure how Patricia Briggs was going to resolve the two stories and have it feel like a coherent whole. I think that was the point though. In the end everything came together but maybe more than usual seemed to rely on coincidence and certain characters behaving to type.

Bone Crossed picks up virtually where Iron Kissed left off. And also puts to rest some plot threads from Blood Bound as well. The vampire queen, Marsilia has found out what Mercy did at the end of the book and is not happy. And whilst Mercy has some protection from the vampires because of Adam and the werewolf pack, this doesn't mean that she is safe. Leaving for a little while seems the smart thing to do, but somehow even doing the smart thing gets Mercy into trouble.

There are two things I really liked about this book. Firstly, it really did tie up some loose ends from previous books in a way that didn't feel rushed or just put there for the sake of it. It was a necessary part of the plot and gave a greater insight into the actions of the characters - especially Stefan and Marsilia.

Secondly, I loved how Adam and Mercy's relationship is developing - and it takes a big leap forward during this story. Though despite appearances at the end of the last book, they aren't rushing into a physical relationship. Apart from anything else, it's patently obvious that Mercy isn't ready- she's now suffering from debilitating panic attacks. Mercy is still 'managing' Adam. After the events of Iron Kissed this is a little concerning. But I guess there isn't exactly another way to handle an alpha werewolf. And at least Adam should be more aware of her tactics now.

One of the things I love most about Patricia Briggs is how she can say so much about a character in such a short space of text. When Mercy stops one of the pack (who doesn't like her) from making a mistake, there isn't an outpouring of effusive thanks. Instead...

He looked at my feet. "You shouldn't be out here barefoot," he told the ground. Then he shut the car door, turned the key as he turned on the lights, and left.
"He meant thank you," said Adam.

Bone Crossed has left me yearning for a couple of standalone stories. Specifically I'd love to know if anything's going to happen between Ben and Mary Jo, and it really feels like Sam could hold a novel/novella of his own. And while I'm having a wishlist Stefan as well. The relationships between the vampires are explored much more throroughly in Bone Crossed and their politics and machinations are fascinating, if a little (a lot) cut-throat and ruthless.

The ending when all the plot threads are brought together is intense and I particularly loved Stefan and Mercy's Last of the Mohican's moment.

For me Iron Kissed was always going to be a hard act to follow. That book was so well written and had such a strong central theme - it's easier to ask for forgiveness than permission. However, at the end of Bone Crossed I can safely say that Patricia Briggs has done it again and I'm counting down the days til I get my hands on Silver Borne.
Posted by LesleyW at 18:17 5 comments: