Rosemary and Rue by Seanen McGuire 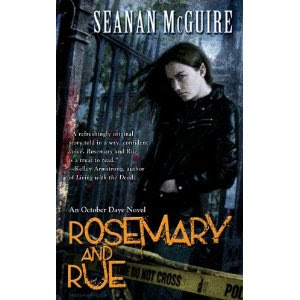 Rosemary and Rue begins the story of October (Toby) Daye. A changeling, she is caught between the mortal and fae worlds. Living in the mortal world, working as a detective, she has a family and has made a place for herself. Unfortunately the world of Faerie doesn't release its grasp that easily and on one evening she loses everything...for fourteen years. We catch up with Toby trying to live an anonymous existence but the world of Faerie is patient and when Countess Evening Winterrose is murdered, Toby is compelled by the victim's dying curse to investigate the murder.

I've been looking at a few reviews of this story and I've come to the conclusion that whether you hate it or love it will largely depend on your opinion of the heroine. I loved her.

For me, it was very much a character based novel, the more you are compelled by the characters and their lives, the more I think you will enjoy the book. The only other author I can think of that made me love a character so quickly is Kelley Armstrong. In just a few pages Seanan McGuire made me care about October and I appreciated the fact that when she was transformed in the first few pages of the novel, that she wasn't anthropomorphised she wasn't a human being trapped in the body of an animal, she was the animal. Somehow that's more horrific, to feel yourself slipping away and know that in a few moments the only life you'll ever remember is the one that you've been transformed into.

I also admit here that I'm a sucker for a book with Shakespearean undertones. 'Rosemary and rue' comes from Hamlet, chapter one opens with a quote from the play and it also holds some parallels with the play. A protagonist being charged to solve/avenge a murder.

I think I'd almost despaired of finding something new and original in UF - preferably ferret free - and yet here it is. October is a melancholy heroine, so if you prefer something jolly, this one probably isn't going to be for you. But she has lost so much, she has a right to be withdrawn.

All thinking did was make me remember what I'd already lost.

She's working on autopilot, merely existing, but the world she's a part of won't let her do that indefinitely. And Rosemary and Rue in a lot of ways is about her seeing her previous life through new eyes and finding out things are maybe not the way she always thought they were and the people she knew maybe don't belong in the pigeonholes she's put them in. She's been drawn into this mess against her will and the situation becomes more complex the further she's pulled in.

I've never liked being looked at like I was a hero.

But that doesn't mean that when she's put on the spot she walks away. She sees her 'quest' through to the end.

Confession - I am going to be a Toby/Tybalt shipper.

...it's something I can count on. Dawn comes, the moon wanes, and Tybalt hates me.

Tybalt is the King of the Cats and I like him because he is (I think) completely different to any other 'hero' I've read. (I put 'hero' in quotes here, because there is no definite suggestion - though there are a couple of hints, that there will ever be anything more than emnity between them). I love him. He reminds me of a little boy who pushes the girl he likes into a mud puddle, pulls her braids,drops spiders down the back of her dress and then can't understand why she doesn't like him. There is such crackling chemistry between them and it's interesting that he sees her perhaps better than she sees herself.

"No," he said, "you didn't want to know. You pigeonholed her the way you've pigeonholed everybody else,..."

But when she needs help, he's the one she goes to, mainly on the theory that no one would ever believe she would.

I don't want to give the impression that it's all doom and gloom. There's some sharp and cutting humour in there - loved the comment about Tinkerbell and the microwave - but it's kept in its place. There's also some good creepy stuff, surely six of the scariest words to be put into a sentence are - "There was someone else in the car."

The whole world is incredibly well realized and peopled with interesting characters - Sylvester, Tybalt, Lily, Luna, Rayseline, Julie, The Luidaeg, the rose goblin. Information/lore about the universe is interwoven into the plot without it feeling infodumpy. But if I had one quibble it would be that rather than a pronunciation guide in the front I wish that there had been an explanation of the various faerie species that are mentioned. I'm not familiar with all of them and it would be nice to have had a reference point.

For me at the end, there was a sense of hope. She's rejoined the world, albeit reluctantly and I am counting the days til A Local Habitation is available. This is one series that I'm going to become addicted to. Highly recommended.
Posted by LesleyW at 23:25

So glad you enjoyed it, Lesley! This was one of my favorite uf series debuts last year.

I actually finished A Local Habitation (in audiobook format) this evening, and it lived up to my high expectations.

There is a bit of melancholy to Toby, which is understandable given the start of Rosemary and Rue. Yet, she is such a survivor, too, and that really makes for a great character. I liked her so much.

Also, like you, I loved Tybalt. And, there is more of him in ALH for you to look forward to! :-)

I had read another review of this book that made me want to read it, but it wasn't anywhere near this comprehensive a review. And the extra detail in yours only makes me want to read it more (though it also forewarns me to read it when melancholy is okay, which in turn increases the chances I'll like it).

Thanks for the notes!

"I think I'd almost despaired of finding something new and original in UF - preferably ferret free - and yet here it is."

Yes! Wholeheartedly agree with you on this.

I took a while to get around to R&R, and only read it last week, but have already snapped up the sequel.

I thought the world-building was excellent, and the language, the phrasing, was spot-on.

Renee - Glad there is more Tybalt in ALH. I think the way he behaves is also reminiscent of cat behaviour - you should be honored I'm paying you attention.

Li - Just waiting for the sequel to be available and I'll be getting it.